Since I embarked on the making of The Brunswick Prison Camp Map Printers in 2014, and indeed since the type was set and the book printed, I have uncovered more and more information, about life in Oflag-79 and particularly about the process and problem solving involved in creating and operating the press successfully. It doesn’t affect how we approached the book, as that was always going to be a reprint of my father’s original article in 1951 Printing Review Special Map Number, but it does raise the interesting question as to whether there might be a further book about the Brunswick Press, and indeed, whether it might be possible to rebuild the press in order to see whether it is possible to replicate the original results…

Among the new material I have found among various boxes and folders I have had in my possession since my father’s death in 1992, (and through several house moves via a number of attics, cupboards and shelves), is a much longer typewritten transcript than the Printing Review article of a talk my father gave about the Brunswick Printers in about 1949-50 containing much more technical information.

Further to that I have an original copy of a typewritten war diary of a man called Wallis Heath living in St. Andrews, Fife with whom I had a correspondence in the mid 1990s. He had also been captured at Tobruk, and had had a parallel journey through various camps to my father, from Chieti in Italy to Oflag-79 at Brunswick. I believe he has now died, but he was kind enough to pass on 40+ type written sheets of his diary to me.

He had printing experience before the war, and though there is no mention of it in his diary, he told me that he had been involved in the map printing press at Brunswick, and though there is no mention of him either in my father’s diaries, he wrote an article which appeared in The Times in 1997 with more than enough technical information that is corroborated by other sources for me to be certain that he was one of the team involved with my father and Ken Whitworth who is mentioned in both my father’s and Wallis Heath’s diaries.

Only one page of Wallis Heath’s notes relates to the Brunswick Printers but it is particularly interesting on the precise detail he briefly records about how the inks and wash-outs were made and how the press worked; used in conjunction with the detailed drawings of my father’s (which can be viewed in other posts on this site) it would seem to be entirely possible to reconstruct a working facsimile of the press… an interesting project about which Ken Burnley and I have had brief initial conversations.

Here below is the page from Wallis Heath’s notes referring to the press, inks, etch, wash-outs and process. 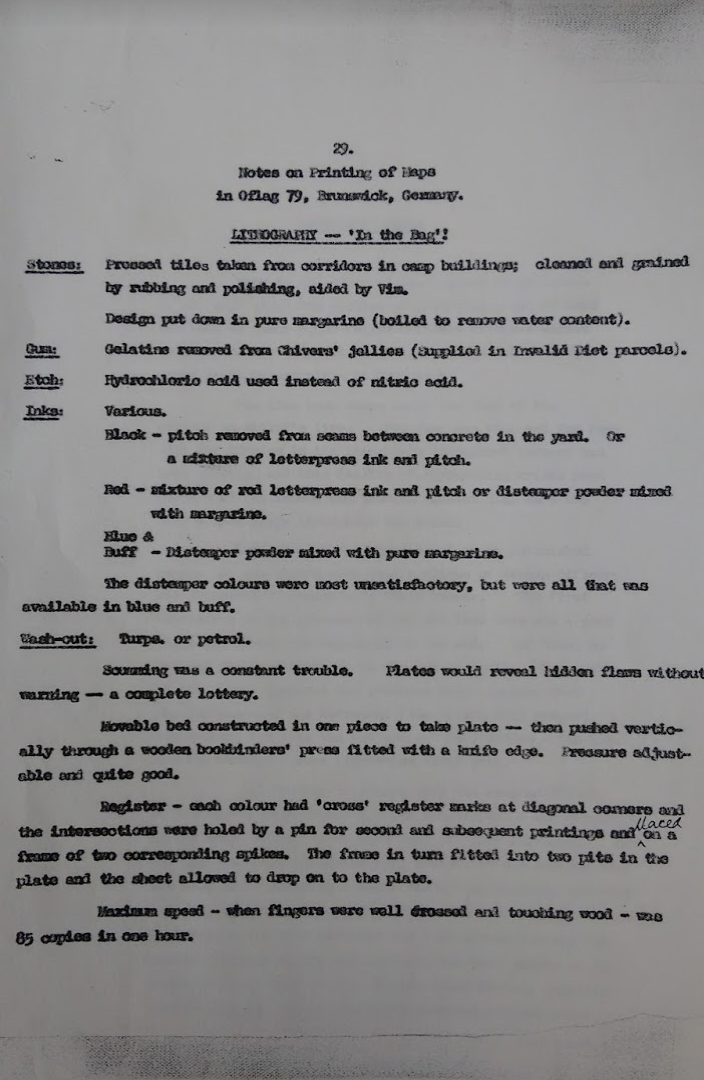